Booklist “The lives of sports figures always make for good subject material for biographies, and the Robbie Reader Contemporary Biographies series is no exception. Each book uses relatively short sentences and lots of photos to introduce subjects, but one never gets the sense that the books are only for beginners. Every title begins with a career highlight and offers a complete portrait while placing primary focus upon the importance of hard work in furthering one’s talents and dreams. Chris Johnson begins a bit oddly: “Not much is known about Chris Johnson’s early life.” So this gets started with the football player’s high-school athletics and centers on his career with the Tennessee Titans, where his running skills are matched by his strength. In Dwyane Wade, the basketball star who grew up in a rough part of Chicago persevered, even when his weak grades didn’t seem good enough to earn him a college sports scholarship. On the other hand, Sue Bird makes it clear that the basketballer would be successful, though she has had to keep her competitive edge and make sure that she doesn’t take her talent for granted. She is also known for her friendliness to fans. According to Tim Lincecum, the pitcher for the San Francisco Giants seemed so young when he started out that he was mistaken several times for a batboy. But this competitor never led his size sidetrack him. His unusual pitching stance has also given coaches and commentators pause, but Tim proved in the 2010 World Series that he’s a winner. The good-size print adds to the series’ accessibility, but the decision to put pronunciations within the text often slows things down. Excellent back matter will lead readers further.”
--Ilene Cooper, Booklist, December 1, 2011 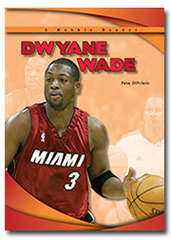 Dwyane Wade never had it easy. He grew up in a part of Chicago that was full of gangs and drugs. His mother had so many problems that his sister raised him for a while before he finally moved in with his father. He became a high school basketball star, but many colleges werent interested because his grades werent good enough. Still, he kept working and believing, and Marquette coach Tom Crean gave him a chance. Dwyane improved his grades and became one of the countrys best college players. He led Marquette to the 2003 Final Four and was drafted by the NBAs Miami Heat. He led Miami to the 2006 NBA championship, then helped the U.S. win 2008 Olympic gold. Along the way he used his Wades World Foundation to help kids and adults. Based on research by veteran sportswriter Pete DiPrimio, this action-packed biography tells how Dwyane Wade has become a real-life hero.

Learning How to Play Wiffle...

Learning How to Play Dodgeball

Learning How to Play Kickball

Learning How to Play Pickle...

Line Dances Around the World