Booklist Grades 4-8. Travel from coast to coast in the eighteenth century took months by wagon or by ship. Of course, the trip could be shortened across Panama—if yellow fever or robbers didn’t kill you. Complemented by archival photos and reproductions, these titles in the Railroad in American History series show just how revolutionary train transportation became in making travel faster and safer. The Birth of the Locomotive re-creates the excitement of spectators catching their first glimpse of this new technology and presents a detailed history of steam engines and how they came to power locomotives. Interesting asides relate more information on influential individuals and such advancements as time zones across the country to keep trains on schedule. Extensive back matter completes each book. ---Booklist (January 1, 2013 (Vol. 109, No. 9)) School Library Journal Gr 5-8-These books present a technology-focused history of the railroad. Each one is devoted to a specific period, and all are written by different authors, which results in an uneven quality. The three volumes that cover the earliest periods are the weakest, largely because their overly technical discussions about the evolution of steam power and railroad technology, usually without adequate illustration, will be difficult for students to understand, and they fail to fully explain how the Industrial Revolution was driving innovation and invention. The three that discuss the later periods fare better, because they include analysis of the societal and economic changes that the railroad created. There is some repetition among the titles. The authors treat their subjects objectively, and the books are illustrated with a mixture of period and contemporary photos and art and documented with chapter notes and bibliographies. These books do not improve on either Milton Meltzer's well-written Hear That Train Whistle Blow! (Random, 2004), a comprehensive single-title overview with an attractive layout, or Martin Sandler's livelier and people-centered titles in Oxford's "Transportation in America" series (2003). They add little to the field, and should be considered as supplemental report choices.-Mary Mueller, formerly at Rolla Junior High School, MO (c) Copyright 2013. Library Journals LLC, a wholly owned subsidiary of Media Source, Inc. No redistribution permitted. 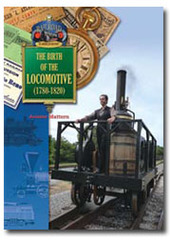 For hundreds of years, people faced the problem of how to transport goods and passengers over long distances. But what could create enough power to move tons of freight? The answer came with the invention of the steam engine! Engineers in England worked for years to perfect an engine that used the power of steam to run large machinery. From simple pumps in the mines to small boilers, engines got better, bigger, and stronger. Finally, by the late 1820s, inventors had created powerful locomotives that could pull many times their weight and the first commercial railways were built. The age of the locomotive was born. Follow the technical challenges and meet the clever inventors who changed the world and gave people a whole new way to travel.

Can We Achieve Gender Equal...

Can People Stop Being Violent?

Americans in the Holy Land

Israel and the Arab World

The Quest to End World Hunger

A Teen Guide to Protecting ...

A Teen Guide to Saving and ...

Native Americans and the US...

A Teen Guide to Buying Bonds

A Teen Guide to Buying Mutu...

A Teen Guide to Buying Stocks

A Teen Guide to Safe-Haven ...

Immigration in the US

US Laws of Citizenship

Your Guide to Becoming a US...

The Birth of the Locomotive...

The Railroad and the Civil ...

The Railroad Comes to Ameri...

The Railroad Grows Into an ...

A History of the Democratic...

A History of the Republican...

A History of Voting Rights

A Kid's Guide to the Voting...

The Bill of Rights (Library...

The Bill of Rights (Softcover)

The Power of the States (Li...

The Power of the States (So...

Volunteering in Your School

Ways to Help After a Natura...

Ways to Help Children With ...

Ways to Help in Your Community

Ways to Help the Elderly

The Monsters of Hercules

Going to School Around the ...

A Kid's Guide to the Economy

Brown v. Board of Education...

A Kid's Guide to Stock Mark...

Coins and Other Currency: A...

Threat to the Bengal Tiger

Threat to the Giant Panda

Threat to the Leatherback T...

Threat to the Spotted Owl

Holidays and Celebrations i...

The Story of the Great Depr...

Top Secret: The Story of th...

The Fury of Hurricane Andrew

Henry Ford: Cars for Everyone

Coretta Scott King and the ...

Henry Ford and the Assembly...

Careers in Law and Politics

Careers in Publishing and C...